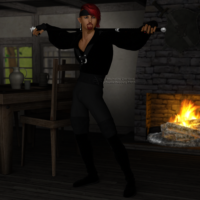 I’ve been steadily working on The Tunorea Chronicles. There is a certain event that is supposed to take place during this book and when working out how to get that done Jon here came about. A while back I had posted about a writing challenge, a character created directly from the input of others. Well, I never got all the input I needed and so I had to bow out of the challenge BUT I did take some of the more interesting aspects people gave me and presto, we have Jon here.

Jon is FAR more then he appears however, for he is NOT an elf at all but rather a Red Dragon from the clans of the northern continent. Jon represents the introduction my readers will get TO the dragon clans, albeit, a brief one for now. And yes, that IS a tiny ruby attached to his claw.